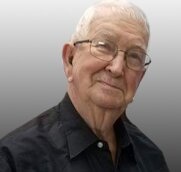 Frank Leroy Boyer was born January 28, 1929 in Kansas City, MO the son of Frank W. and Virgie M. (Rogers) Boyer. Frank served his country in the United States Army. He was a Mason for 69 years and was a member of the Anderson Lodge 621. He worked for General Motors for 33 years retiring in 1983. Frank was a member of the Seneca Christian Church.

Frank was preceded in death by his parents and one brother Howard (Bud) Boyer.

The family will receive friends from 6 -7pm, Friday, June 5, 2020 at the Campbell-Biddlecome Funeral Home, Seneca.

Funeral services will be held at 1:00 pm, Saturday, June 6, 2020 at the Seneca Christian Church with Joshua Frakes officiating. Burial will be in the Oakwood Cemetery with Devan Glover, Beau Green, Clint Lester, Steve Esry, Howard Hickox and Greg Vogt serving as pallbearers.
To order memorial trees or send flowers to the family in memory of Frank L. Boyer, please visit our flower store.