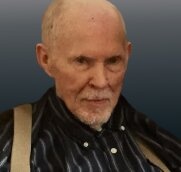 Floyd Odal Conduff was born April 25, 1931 in Seneca, Missouri the son William and Elsie (Bryant) Conduff. Floyd was of the Christian faith. He served in the US Army and he formerly worked at the Post Office and was a farmer. Floyd loved to travel on road trips to National Parks, play games, take pictures, read his bible and visit with his family.

Floyd was preceded in death by his parents William and Elsie Conduff, his wife Venda B. Conduff; his brothers, Charles Conduff and Raymond Conduff; His sisters, Ruby Patton, Edna Petty and Pearl Rogers Mott.

Graveside services under the direction of Campbell-Biddlecome Funeral Home, Seneca, MO will be held at 10:00am, Tuesday, July 19, 2022 in the open air chapel at the Seneca Cemetery, Seneca, MO with Ernie Conduff officiating.
To order memorial trees or send flowers to the family in memory of Floyd Conduff, please visit our flower store.

Services will be held in the open air chapel located on the west side of the cemetery.