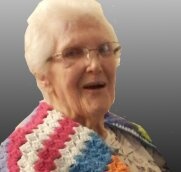 Evadean was born May 31,1933 in Oklahoma south of Seneca on Cayuga Road the daughter of Otis and Ruth Friend. She lived there until she married Darrel K. Roberts June 8,1957. They moved to Independence, Mo where Darrel worked for General Motors at Leeds in Kansas City, MO. Darrel proceeded Evadean in death November 1,1999 after 42 1/2 years of marriage. Evadean was a home maker and had worked short hours for the Independence Public Schools for 18 years. Evadean attended Pebble Creek Assembly of God Church. Her favorite Bible verse is John 3:16.

Evadean was also preceded in death by her parents and one brother Jim Ray Friend.

Graveside services under the direction of Campbell-Biddlecome Funeral Home Seneca will be held at 2:00 PM, Tuesday, June 11, 2019 at the Seneca Cemetery with Ernest Friend officiating.

In Lieu of flowers memorial contributions can be made to Pebble Creek Assembly of God 13800 E 31st, Kansas City, MO. 64133.
To order memorial trees or send flowers to the family in memory of Evadean Roberts, please visit our flower store.