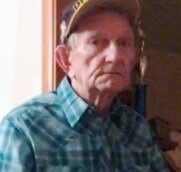 .
Ernest O. DeWitt, 86, formerly of Kouts, IN, passed into eternal rest December 30, 2019 at National Health Care in Joplin after a long illness.

Ernest Orrin William DeWitt was born in Rensselaer, IN the son of Orrin and Myrtle (Bennett) DeWitt. Ernest served his country during the Viet Nam War in the Navy. He continued his service for 20 years. Following that he become a truck driver and continued until retiring 2005 then went to escorting large loads for several years. He was a Christian.

The body has been taken for cremation under the direction of Campbell-Biddlecome Funeral Home, Seneca. The family will hold a Memorial service at a later date in Kouts, IN where his cremains will be placed in the Graceland Cemetery, Kouts, IN
To order memorial trees or send flowers to the family in memory of Ernest DeWitt, please visit our flower store.