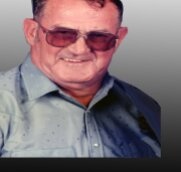 Eldon Ross Wilson was born January 17, 1937 in Seneca, MO the son of Manford and Emma Olive (Gibson) Wilson. Eldon formerly worked for LA-Z-Boy Midwest in Neosho. He enjoyed woodworking and was a Christian.

The family will receive friends from 6 to 7 pm, Monday, December 2, 2019 at the Campbell-Biddlecome Funeral Home.

Graveside services under the personal direction of Campbell-Biddlecome Funeral Home, Seneca will be held at the Swars Prairie Baptist Cemetery, December 3, 2019, at 1:00 pm, with Roy Scribner officiating.
To order memorial trees or send flowers to the family in memory of Eldon Ross Wilson, please visit our flower store.