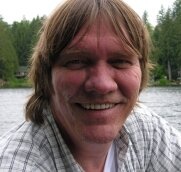 _________
Edward Layman Fuller was born August 18, 1960 in Elkins, West Virginia the son of Donald and Daryl (White) Fuller. Edward enjoyed being on the internet, drinking beer and watching Scrubs and 2 ½ men. He also played card games, darts and dominos. He had lived in Seneca for the last 7 years. Edward formerly was an over the road truck driver.

The family will hold a Celebration of Life Memorial Service at a later date.
_____
To order memorial trees or send flowers to the family in memory of Edward Fuller, please visit our flower store.