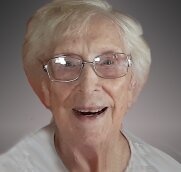 Edith Lorene Tosh was born February 9, 1924 in Watts, OK the daughter of Jacob Edward Tosh and Virgie Ann (Marler) Tosh. She attended the Wayside Assembly of God in Wyandotte. Edith formerly worked at a canning factory in California and then the Glenn Berry Garment Factory in Miami, OK. Edith loved to crocket, singing, cooking and spending time with her family.

Edith Lorene Tosh married Charley Roscoe Burleson September 5, 1941 and he preceded her in death July 29, 1993. She was also preceded in death by her parents and one sister, Retha McElhaney.

Funeral services will be held at 10:00 am, Thursday, September 23, 2021 at the Wayside Assembly of God Church, Wyandotte with Pastor Fred Gammon officiating. Private burial will be in the Council House following the services.

Arrangements under the direction of the Campbell-Biddlecome Funeral Home, Seneca, MO.


To order memorial trees or send flowers to the family in memory of Edith L. Burleson, please visit our flower store.