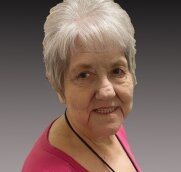 Donna Kay Johnson, 70, Neosho, MO, passed into eternal rest January 14, 2022 at Freeman West Hospital after an illness.
Donna Kay Booth was born July 19, 1951 in Wabash, IN the daughter of William and Thelma Booth. Donna had an Associates of Business Degree. She formerly worked for GXT Tire and was a customer service rep. for AT&T. She enjoyed cooking, baking, knitting, puzzles and watching Hallmark movies. Donna was of the Baptist faith.
Survivors include her son Scott Johnson and wife Mendel, Seneca; siblings Larry Booth, Ft Wayne, IN, Harold Booth, Wabash, IN, Benny Hively, Warsaw, IN Betty Louise Owens, Argas, IN, Cindy Hively, New Haven, IN, Mickey Hively, Warsaw, IN; three grandchildren, Mackensie Powers, Skye Johnson and Kade Johnson and her best friend Maxine Johnson.
Donna was preceded in death by her parents William and Thelma and one sister Patricia “Sue” Hoppus.
The body has been taken for cremation under the direction of Campbell-Biddlecome Funeral Home Seneca. Services will be held by the family at a later date.
To order memorial trees or send flowers to the family in memory of Donna Johnson, please visit our flower store.