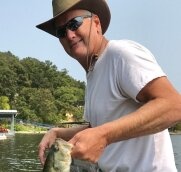 Don J. Roark was born June 13, 1955 in Neosho, MO the son of Carl and Minnie (Nutting) Roark. Don was a 1973 graduate of Seneca High School following high school he began working at the former BF Goodrich Plant in Miami, OK until it closed in 1986. Don then went to Missouri Southern State College and received an associate degree as a Radiology Technician in 1989. He then began working for the former St. John’s Regional Medical Center. After the Joplin tornado Don went to work for Mercy Hospital in Joplin until 2013. Don loved working outdoors, working with wood, being in nature, Bass Fishing, sports cars helping with Journey to Bethlehem at Racine Christian Church, listening to Pink Floyd and taking his Golden Retriever Sandy on rides around town. Don accepted Jesus as his Lord and Savior and was baptized in 2013. He was a member of the Racine Christian Church.

The family will receive friends from 6 to 7pm, Friday, November 5, 2021 at the Campbell-Biddlecome Funeral Home.

A private burial will be in the Seneca Cemetery.

To order memorial trees or send flowers to the family in memory of Don Roark, please visit our flower store.