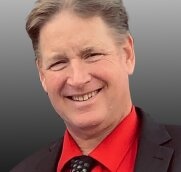 Dawayne Moore Garlington was born June 28, 1965 in Lancaster, CA. the son of Bill and Linda (Robinson) Garlington. In his preteen years they moved from California to Texas. He started his own business of shining shoes at the age of 10. Dawayne graduated from Central High School in Lufkin, TX in 1984. He was raised in the Apostolic Temple in Lufkin, TX under Pastor R.A Hancock. He had lived in the Neosho Area for the last 20 years. He was a faithful member of the Apostolic Lighthouse in Racine, MO, under Pastor Kelly Sampson. Dawayne was a singer, he played the Trombone, he was a door greeter and was an avid storyteller. Dawayne had many skills but his passion was auto body repair and painting. Dawyane Moore Garlington married Mary Elizabeth Dunn June 7, 1986 in West Monroe, LA and she survives. His wife Mary was the love of his life. His children and grandchildren were his world. His parents and family meant everything to him. He was faithful to his Team the Broncos and made sure that everyone knew it!! Dawayne loved going to church and his excitement for the new church building was contagious! Dawayne was loved by all that knew him and will be forever remembered.

Dawayne was preceded in death by his father-in-law Hardy Dunn.

Funeral services will be held at 10:00am, Saturday, November 7, 2020 at the Light House Apostolic Church with Pastor Kelly Sampson officiating. Burial will be in the Burkhart Cemetery Racine, MO. with Dawayne Garlington Jr., Jordan Henry, Daniel Roach, Dale Campbell, Bill Garlington and Christopher Herion serving as pallbearers. Honorary pallbearers will be Nicholas Herion and Quentin Herion.

Arrangements under the personal direction of Campbell-Biddlecome Funeral Home Seneca, MO.
To order memorial trees or send flowers to the family in memory of Dawayne Garlington, please visit our flower store.