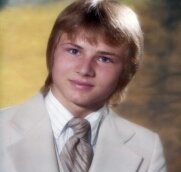 David Lee Heistand was born August 17, 1962 in Neosho, MO the son of David Leon Heistand and Della May McCall. David was a 1980 graduate of Seneca High School. David formerly worked at Seneca House Nursing Home. He was avid golfer and loved playing his guitar.

David was preceded in death by several Aunts and Uncles and his grandparents Wilmer and Dorthy Heistand and John and Helen McCall.

The body has been taken for cremation under the direction of Campbell-Biddlecome Funeral Home, Seneca, MO.
To order memorial trees or send flowers to the family in memory of David Lee Heistand, please visit our flower store.

A Celebration of Life Memorial Service with Charles Whitekiller officiating. The body has been taken for cremation.