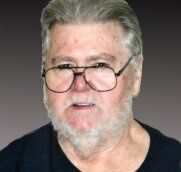 His battle ended just 5 weeks after discovering the extent of the cancer that consumed him.

Heaven now has a crazy, adventurous, dirt biking, 4-Wheeling, Viking in its number.
He, like his Savior, is risen and we celebrate that pain has him no more.
Darry was a strong, formidable bear of a man, but those of us who really knew him experienced a loving, giving, and clever man who enjoyed woodworking, cooking for his family and collecting an assortment of vehicles, model cars and cowboy hats.

Darry was born to Kenneth and Betty Sandtorf in 1942. He had a wanderlust and found his love and adventure mate just next door. Darry and Sherry married in 1964, bought a fast car and sped off into the horizon. Darry joined the International Brotherhood of Heat and Frost Insulators and that profession allowed them to explore the country. This journey took them to Missouri, Kansas, Montana, Wyoming, Idaho, Colorado, and Alaska – just to name a few of the places Darry and his family lived and worked.

Darry had a work accident in his 50s that led to retirement and embarked him on his greatest purpose in life – being a Grandfather! He showed his grandchildren and great-grandbabies how to live and love. He also served as an elder at the Seneca Church of Christ.
Darry is survived by beloved wife Sherry Sandtorf, daughter Trisha Sandtorf Ton and husband Mike, sister Jana Sandtorf Hayes, and brother David Sandtorf and wife Carolyn.
Other survivors include grandchildren Shannon and Greg Hatfield, Matt and Kayla Hayes, Mark and Hannah Hayes, Ashley and Jeffery Kelley, Ayla (Troye) and Miles Ton, and great-grandbabies Mia and Jack Hatfield, Liam and Corbin Hayes, and Atticus and Philo Hayes. Each had their own significant relationship with Darry. He also leaves behind a slew of nieces and nephews and extended family whom he loved fiercely.

Darry is proceeded in death by his parents Kenneth and Betty, his son Thomas Ramone Sandtorf, and his brother-in-law Tim Hayes.

The Memorial Celebration will be at Seneca Church of Christ on Saturday April 23rd with visitation from 1:30-3pm.

The body has been taken for cremation under the personal direction of Campbell-Biddlecome Funeral Home, Seneca, MO.
To order memorial trees or send flowers to the family in memory of Darry Sandtorf, please visit our flower store.