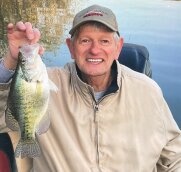 Dallas Gene Fortner was born March 6, 1938 in Wyandotte, OK the son of Halbert Bruce and Ruby Pearl (Rhine) Fortner. Dallas loved fishing, horseshoe pitching, the lake and his community and family. Dallas was a former President of the Seneca School Board and had served the community in several organizations. He formerly worked as a Funeral Director for the Campbell-Biddlecome Funeral Home. Dallas worked for many years at the former BF Goodrich plant in Miami, OK. after the close of the plant Dallas went to work as a Security Guard for MSSU in Joplin until his retirement.

Dallas Gene Fortner married Barbara R. Eddings August 23, 1958 in Miami, OK and she preceded him in death June 9, 2016. Dallas was also preceded in death by his parents and one brother, Willard Fortner.

The family will receive friends from 10am to 11am, Monday, July 12, 2021 at the Campbell-Biddlecome Funeral Home, Seneca. Graveside services will be held at 11:00am following the visitation at the Seneca Cemetery with Billy Friend officiating.

To order memorial trees or send flowers to the family in memory of Dallas Fortner, please visit our flower store.