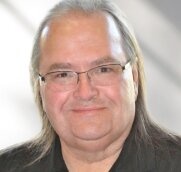 Dale Barger was born in Topeka, KS on October 4, 1956, to Donald ‘Gene’ and Betty (Haggard) Barger. He departed to be with the Lord on March 24, 2021, at the age of 64 following an automobile accident near his home in Wyandotte, OK.

Dale graduated from Madison High School in 1974 and spent the majority of his career with the Dolly Madison Bakery in Emporia, KS. Dale enjoyed spending time with his family, especially spoiling his wife, doting on his grandchildren, and cuddling with his Shih Tzu's. Dale had a lifelong love of vintage/muscle cars, guns and shooting, as well as Oklahoma Sooner’s Football. He was also an active member of Central Christian Center in Joplin, a 32nd degree Mason, and a member of the Scottish Rite.

Dale and Vanna Barger were married on, September 18, 2015. In addition to his wife, he is survived by his three sons, Ryan (Kateryna), Jacob (Casie), Caleb (Iris), and children through marriage Rachel Drumeller and Steven Stroud. Dale also leaves behind six grandchildren: Alyssa, Garrus, Easton, Patrick, and Maryna. His brothers, Michael, David, Robert, and Roger also survive. He was preceded in death by both parents, Donald and Betty, as well as his brother Travis.

A Celebration of Life Memorial Service for Dale will be held at 1 p.m. on Monday, March 29, 2021, at the Central Christian Center of Joplin, MO.

Contributions can be made to the Dale Barger Memorial Fund in care of People’s Bank of Seneca PO Box 500, Seneca, MO 64865.
_____
To order memorial trees or send flowers to the family in memory of Dale Barger, please visit our flower store.

The family will be holding a Celebration of Life Memorial Service