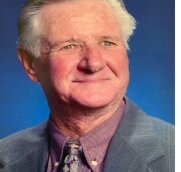 Roy “Clayton” Montgomery was born November 15, 1925 in West Seneca, OK the son of Walter and Rosa Anne (Yocum) Montgomery and was a lifelong Seneca resident. Clayton was a 1943 graduate of Seneca High School. He proudly served his country in the Merchant Marines. He served on 4 different ships during his time in the Merchant Marines. He worked 48 years for the former Milnot plant. He was a longtime member of the First Baptist Church in Seneca, MO where he served as a Deacon for many years. Clayton loved working outside on his garden. He loved fishing and especially loved spending time with his family.

Clayton Montgomery married Wanda JoAnne Rawlinson February 7, 1948 in Miami, OK and she preceded him in death October 17, 2001. Clayton was also preceded in death by his parents and three brothers, Gordon Zane, Leon Montgomery and Carl Montgomery.

The Montgomery family will receive friends from 2:00 pm to 3:00 pm, Saturday, September 28, 2019 at the Campbell-Biddlecome Funeral Home, Seneca, MO.

Funeral services will be held at 2:00 pm, Sunday, September 29, 2019 at the Seneca First Baptist Church with Bro. Rod VanGorkam and Bro. Aaron Weible officiating. Burial will be in the Seneca Cemetery with grandsons serving as pallbearers.
To order memorial trees or send flowers to the family in memory of Clayton Montgomery, please visit our flower store.