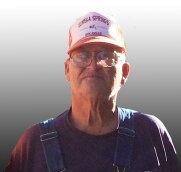 Claude Merriman was born June 6, 1942 in Racine, MO the son of Arnold Robert and Cinderella (York) Merriman. Claude was a lifelong area resident. He retired from the Public Works department for The City of Seneca. Claude loved being around people and loved to tease them. He was always concerned about those around him. He loved spending time with his son and his grandchildren.

Survivors include one son Claude Merriman Jr. and wife Hiroko; two brothers, Ted Merriman and Rod Merriman; one sister Emmalou Atchison; four grandchildren; Dalan, Dayton, Maya and Mina and he has one great-grandson Harlan on the way.

Claude was preceded in death by his parents, one son, Greg Merriman, two brothers, John R Merriman and A J Merriman and one sister Phyllis Reed.

The body has been taken for cremation.

A Celebration of Life Memorial Graveside service will be held 10:00 am, Friday, Sept 25, 2020 at the Seneca Cemetery.

Services under the personal direction of Campbell-Biddlecome Funeral Home Seneca, MO.
To order memorial trees or send flowers to the family in memory of Claude Merriman Sr., please visit our flower store.