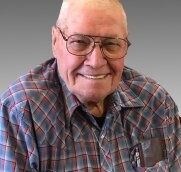 Charles J. Lofland was born February 9, 1930 in Wyandotte, OK the son of Fredrick and Bessie Dale Lofland. Charles formerly owned and operated C & R Grocery. He was a Dairy Farmer and carpenter. He served his country in the United States Army from 1951-1953. Charles was a member of the Wyandotte Nation of Oklahoma. He formerly served on the Board for the Seneca Assembly of God where he attended for many years. Charles J. Lofland married Rosemary Green October 5, 1950 in Eureka Springs, AR.

Survivors include two sons, Larry Lofland and Maureen Sparks and Doug and Judy Lofland, all of Wyandotte, OK; one brother, Marvin Lofland, Scappoose, OR; one sister Evelyn Morgan, Boise, ID;
5 grandchildren and 9 great-grandchildren.

Charles was preceded in death by his wife Rosemary on December 29, 2015. He was also preceded by his parents, Fred and Bessie Lofland, two brothers, Lewis and Mead Lofland and one great granddaughter, Henleigh Marie Lofland.

The family will receive friends from 1:00pm to 2:00pm, Thursday, February 13, 2020 at the Seneca Assembly of God. Funeral services will follow at 2:00pm with Pastor Denny Sikes and Pastor Mike Younger officiating.

Charles will be laid to rest next to his wife Rosemary in the Wyandotte Cemetery. Pallbearers will be grandsons and great-grandsons, Eric Lofland, Ryan Lofland, Curtis Lofland, Cade Lofland, Brady Lofland and Devon Rutledge.

Arrangements under the direction of Campbell-Biddlecome Funeral Home, Seneca, MO.
To order memorial trees or send flowers to the family in memory of Charles Lofland, please visit our flower store.