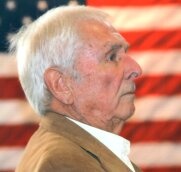 .
Carl Theodore Hansen, Jr. of Seneca, Missouri, aged 98, made his final journey on October 10, 2019. He will be forever joyfully flying among the stars.

Carl was the oldest son of Hazel Hansen, of Seneca, and Carl Hansen, Sr., of Copenhagen, Denmark. He was born in Neosho, Missouri on June 12, 1921. He traveled the world with the military – first with the Navy, then the Air Force, and finally retiring from the Air National Guard as a Lieutenant Colonel. He then served as a flight instructor for the Federal Aviation Administration, and also worked with private corporations as a helicopter pilot. Amongst the family, he is remembered for landing his helicopter on the Iva Wells school grounds in Seneca while on a cross-country flight, giving his nephew, Doug Hansen, instant celebrity status.

Carl is survived by his sister, Mary Paul Horn, of Daphne, Alabama, and one daughter, Candace Sutcliffe, of Wellesley, Massachusetts. Also surviving are his nephew, Doug Hansen, and nieces Lori Onstot and Sherrie Hansen of the Seneca area, and Melissa Callaway, of Daphne, Alabama. Carl was predeceased by his parents, his brother Robert Hansen, his brother Max Hansen, and his nephew, Greg Horn.

A military memorial service will be held at the Seneca Cemetery. The date will be determined.
To order memorial trees or send flowers to the family in memory of Carl T. Hansen Jr., please visit our flower store.