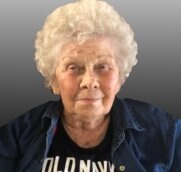 Bonnie Mae York was born July 1, 1931 in Jasper, MO the daughter of Robert Hugh and Alma Faye (Byrd) York. Bonnie loved riding horses and being in the outdoors. She and her husband Joseph worked for the Forestry Service as guides for 15 plus years. Bonnie was a member of the Warrens Branch Baptist Church, Seneca for 15 years. She was a faithful member until she was unable to attend church due to her health issues.

Bonnie Mae York married Joseph Clyde Fanning Jr. May 4, 1946 in Girard, KS and he preceded her in death June 30, 2002. Bonnie was also preceded in death by her parents, her stepfather, Louis Dirksien, one son, Ronald Fanning and two brothers Dean York and Wayne York.

The body has been taken for cremation under the direction of Campbell-Biddlecome Funeral Home, Seneca, MO. The family will hold a Memorial Services at a later date.
To order memorial trees or send flowers to the family in memory of Bonnie Fanning, please visit our flower store.