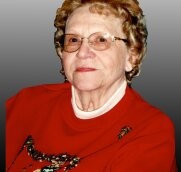 As the sun sets ending the light of each day, I will remember that somewhere on a new horizon it rises again far away. I realize as my world becomes darker due to your passing, I understand that your life is just now dawning into the brightness of a brand-new day. Mom, I will miss you greatly. I wrote these words as a tribute of my memories of you.

Bobby Jean was the eldest of three children born to Harvey Estelle Rinehart and Angie “ Roberta “ ( Richardson ) Rinehart. She was born in the home of her grandparents Albert Rinehart and Mary Caroline ( Roark ) Rinehart south of Seneca Missouri. Bobby was proceeded in death by her parents, her brother Albert Francis Rinehart and her second husband Dr. Claude Linden Doerge.

Bobby is survived by her daughter Linda (Grainger-Cole) Varner and husband Andy Varner of Houston, Texas. Grandson Jeff Cole owner of a Snap-on Tool franchise in Joplin, Missouri. Other survivors include: first husband Marvin Grainger; grandchildren, Dylan Cole of Lubbock, Texas and Bailey Cole of Carrollton, Texas. A sister Mary Lee Rinehart ( Cornell ) McGuire, her two sons John and Jay Cornell and their families from Sedalia, MO. Sister-in-law Maxine ( Raider ) Rinehart who along with her two sons Steve and Scott Rinehart they live in Fredonia, New York area. Others near and distant cousins of Bobby’s include the Rinehart, Chester, Roark and Mailes families around Seneca. Also, the descendants of Nicolas and Frances Poiry who live near Toledo, Ohio.

Bobby’s working life started with a big Kick. At age 6 she attempted her first time trying to milk a cow. Apparently, the cow had different ideas and kicked her clean out of the barn. But growing up on a dairy farm, milking soon became just one of her chores. During her early teens Bobby moved into town helping take care of her aging grandparents. She also worked some other jobs, such as being a packer at the Pet Milk Company, a soda jerk and drug store assistant. During this same time, she was still a student going to high school where she also worked in the principal’s office. After graduating Bobby was hired by Bell Telephone in Joplin where she was trained to be a telephone switch board operator. Soon after she was transferred to work in the Neosho Office. In 1946 Bobby was married to Marvin Grainger then the next year I arrived into the picture and Bobby became a stay at home mother. The move to Joplin for dad’s job happened in 1951. Later when I became a teen Bobby returned to work, first in retail sales at Newman’s Department Store. One day Mr. Schwab asked her if she had any office experience? Answer-yes, and the next week she was transferred upstairs to a secretarial position.

As it happened our new next door neighbor was in charge of installing the first computer ( Knovac ) in Joplin in the Newman’s office. It took up an entire room. Bob Rice taught Bobby how to become a key-punch operator, the first in Joplin. Bobby’s next job was office management for International Paper & Bag Company. She worked there until met and married her second husband Claude. Together they helped many patients including me over come injuries and illnesses running their Doerge Physiotherapy Clinic until Doc himself got sick.

Bobby’s work history didn’t stop after Claude passed away because he left her a farm in Kansas to rent out and lease the acreage to be farmed. Bobby continued doing this into her 90’s.

It was at Swars Prairie Baptist Church Bobby met her first husband Marvin Grainger whose father was the minister. They dated some in high-school and later married in June of “46”. As a family we enjoyed boating on the nearby lakes and took many vacation car trips. We camped in every state park in Colorado, got our worst sunburns on the beach in Biloxi, Mississippi, climbed down into the Grand Canyon and drove to the top of Pikes Peak. They divorced but Bobby later traveled with Claude going deep-sea fishing off the coast of Florida. They too enjoyed Grand Lake having a boat docked near the dam. They camped in Wyoming where Bobby hunted and Killed her first Elk. After Clade passed Bobby traveled with her sister Mary Lee and an education group who toured Europe and Mexico. They also traveled several times to visit the Ohio and New York relatives going across the border into Canada and visiting Niagara Falls. Mom said of all these travels the green fields of Ireland were her favorite.

During high school Bobby was a member of the business club, set on the student counsel one year and was the drum majorette for the school marching band. Skating was quite popular as recreation in the 40’s and Bobby excelled at skate dancing. After WWII she was a hostess for USO functions held at Camp Crowder. At that time, she was also a member of Beta Sigma Phi sorority. From Bobby’s 30’s well into her 80’s she bowled on many league teams in Joplin and traveled with them to bowling tournaments. She was a skilled bowler winning numerous patches and trophies. Picking up the “Big 4” being just one example. Bobby became a life-time member of the ladies Auxiliary in Columbus, Kansas. It was through the groups that long-lasting friendships developed, the Bass family form Columbus and Gert Kelly in Joplin. Another good friend Jim Brown who ran errands and drove Bobby where ever when she no longer could. Ya’ll had some good times.

Bobby has always been a member of the Baptist faith, lastly being a member of Harmony Heights Baptist Church in Joplin, Missouri. However, it was Swars Prairie Baptist Church original building where she grew up as a member, was baptized and where she now returns for her eternal resting place.
To order memorial trees or send flowers to the family in memory of Bobby Jean Rinehart- Grainger - Doerge, please visit our flower store.

A Celebration Of Life Funeral Service will be held following the visitation.