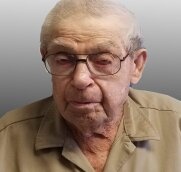 Billy Roy Rhinehart was born March 16, 1929 in Seminole, OK the son of William and Hazel (Yeager) Rhinehart. Bill owned and operated Rhinehart Farms south of Seneca for over 50 years. Bill loved to hunt, fish, grow blueberries and make Willow furniture. Bill was a US Army Veteran serving during the Korean War. Billy R. Rhinehart married Zula Sasser December 27, 1955 and she preceded him in death December 24, 2002.

The family will receive friends from 6 to 7 pm, Friday, July 19, 2019 at the Campbell-Biddlecome Funeral Home, Seneca, MO.

Funeral services will be held at 10:00 am, Saturday, July 20, 2019 at the Campbell-Biddlecome Funeral Home, Seneca, MO with Pastor Denny Sikes officiating. Burial will be in the Thompson Grove Cemetery with Justin Rhinehart, Ryan Rhinehart, Levi Rhinehart, Bob Porter, Phillip Rhinehart and Daryle Rhinehart serving as pallbearers. Honoray pallbearers will be Jason Porter and Wesley Porter.

The family would like to thank the staff of Granby House for the great care they gave Bill.
To order memorial trees or send flowers to the family in memory of Billy Rhinehart, please visit our flower store.