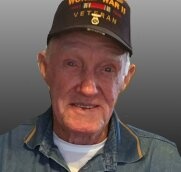 Billy Alton Martin was born October. 14, 1927 in Seneca, MO the son of H.H. (Red) and Bonnie (Skaggs) Martin. Bill was a Navy Veteran serving his during WWII. he was an Eagle Scout and then became a Scout leader for many years. Bill loved to travel with his wife Dorothy, the spent winters in Rock Port, TX then he would come back to Seneca for a while then would travel to Wisconsin. In the 1940’s Bill owned and operated a Grocery Store in Walkerville (the Westview area east of Seneca). Bill loved to fish especially in the Gulf. Bill formerly worked for Allied Systems hauling car and was a member of the Teamsters Local 41. He attended the Seneca United Methodist Church. Bill loved to have fish fries at the church.

Billy A. Martin married Dorothy Louise Jones December 26, 1963 in Vinita, Ok and she preceded him in death March 26, 2018. Bill was also preceded in death by three sons, Billy, Patrick and Wayne.

In lieu of flowers memorial contributions can be made to the Joplin Humane Society in care of the Campbell-Biddlecome Funeral Home, PO Box 380, Seneca, MO 64865.

The body has been taken for cremation and a Celebration of Life Memorial Service will be held at 2:00 pm, June 1, 2020 at the Campbell-Biddlecome Funeral Home Chapel in Seneca, MO.

To order memorial trees or send flowers to the family in memory of Billy Martin, please visit our flower store.