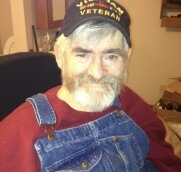 Billy "Bill" Jon Heidrick passed into eternal rest September 16, 2021, at the age of 71 at his home in Seneca, MO following a short illness and decade of other serious medical issues. Bill was a member of the Church of Christ.

Despite his physical limitations, Billy wore a smile and found the many blessings in each day. He was the 3rd of 5 children born on June 20, 1950, in Fort Knox, KY, to Robert D Heidrick and Clara Belle (Snow) Heidrick. He was an Army Brat but lived the majority of his life in the Seneca area. He attended Westview School for his elementary years and was a 1968 graduate of Seneca High School. He was quite the charmer and a true "ladies man." He was an accomplished athlete in both wrestling and football. Bill would not tolerate a bully, and never backed down when provoked, often dispensing justice with his knuckles. Bill began studying auto body repair at Crowder College in Neosho, MO; an interest he carried through his entire life. After his short time at Crowder, Bill enlisted with the Marines just weeks before receiving a draft notice. Bill was very proud of the time he served and fought for our country as a Corporal in the United States Marine Corps 1968-1970. He served in Vietnam under Oliver North, and was his radio operator. Bill worked as a forklift operator at Talbot Wire in the 80’s but spent the majority of his career as a carpet and tile and linoleum installer with his own business while also traveling across the country alongside his father in law with Goodman Church Builders, Inc. for many years.

Bill Heidrick met Brenda Heath at Dog 'n Suds in Neosho, MO. They married in 1972 and after the loss of several babies, had their children, Brandon and Breanne. They were married 29 years, and though divorced 20, maintained a good relationship.

Bill was generous to a fault, never meeting a stranger. He never forgot a face. He had an unbelievable ability to forgive people who had wronged him, time and again. He made a point to tell everyone daily how much he loved them. He was present when it mattered, had your back always, gave selflessly to those in need, and would defend and stand up for his loved ones. He provided a sense of security and safety.

Bill was an avid hunter and fisherman with a passion for the outdoors and wildlife. He was a highly skilled archer. The odds of shooting a "Robin Hood" is a 1 in 3,000 chance, yet Bill defied the odds; he ruined countless arrows. He could shoot a dime out of the air with a lever action 22. He was an unashamed show off.

Bill loved nothing more than spending time with his family. His granddaughters Alivia, Allison, and his great nieces and nephews were the lights of his life. He also enjoyed riding his Harley motorcycle when he retired. At a younger age, he enjoyed his 1968 Chevelle and his 1949 Indian motorcycle.

He absolutely adored his wiener dogs, Bella and Sophie, whom he would often serenade with impromptu songs and loved to tell stories about them. He and Sophie had a very vocal relationship with lots of growling/talking to each other, especially when fried chicken was involved. During his final moments, Bella would not leave his side.

He kept people rolling in laughter with tall tales and corny jokes because he could find humor in the most mundane life circumstances. He loved flirting with his dialysis nurses at Fresenius Kidney Care and sharing jokes and stories with his transport drivers from Caring Mobility, who became dear friends to him. Nursing staff could often be found gathered at his bedside laughing and carrying on. He could be a lovable grouch, always giving you a hard time, but with a twinkle in his eye and a smile under his scruffy old beard.

From the time it was constructed, Bill desired to visit the Vietnam Memorial. On September 11, 2001, he was in Washington DC and witnessed the attack on the Pentagon.

Bill possessed an unsurpassable will to live, surviving the 2011 Joplin, MO, tornado. At that time, he was an ICU patient at St. John's Hospital recovering from a debilitating stroke. He was handed an ambu bag and kept himself alive until emergency medical personnel arrived.

He loved to go off-roading in his motorized chair (the chair, not so much). He drove it like an army tank and expected it to perform like one.

One of his many favorite sayings include, "I feel more like I do today than I did yesterday."

Bill was preceded in death by his parents, Robert "Bob" and Clara, and a sister, Diana Heidrick. The body has been taken for cremation under the direction of Campbell-Biddlecome Funeral Home, Seneca, MO. A Celebration of Life Memorial Service will be held at a later date.
To order memorial trees or send flowers to the family in memory of Billy Heidrick, please visit our flower store.