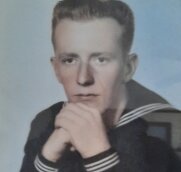 Billy Hermon Cole was born November 3, 1939 in Stella, MO the son of William and Merell Cole. He served his country in the US Navy from 1957 to 1963 as a “The Pineapple Express”. He flew all over the South Pacific going from country to country. Billy formerly worked as a truck driver while living in California. He worked for Oleson Brothers Trucking, Wilhite Trucking and Turlock Concrete. After retiring in 2004 he moved to Wyandotte, OK. Billy enjoyed hunting, fishing, camping and being outdoors. He was a member of the NRA, Modesto Houndsmen Club and was of the Baptist faith.

Additional survivors include two sons, Robert Cole and Billy Cole both of Wyandotte, OK; one brother Vernon Cole, Miami, OK; one sister Barbara Campbell, Wyandotte and a host of nieces and nephews.

Billy was preceded in death by his parents and one son Brian Cole.

The body has been taken for cremation under the personal direction of Campbell-Biddlecome Funeral Home, Seneca, MO. Services will be held at a later date.
To order memorial trees or send flowers to the family in memory of Billy Cole, please visit our flower store.