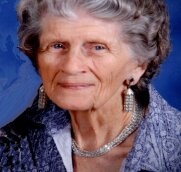 Billie Lee Goode was born September 14, 1931 the daughter of Harry and Beulah (Miller) Goode. Billie worked for the former St. John’s Hospital in Joplin in the dietary department. She loved her family, watching hummingbirds and she loved dogs. Billie was a member of the Hornet Christian Church for over 55 years.

The family will receive friends from 1 pm to 2 pm, Wednesday, October 9, 2019 at the Hornet Christian Church. Funeral services will be held at 2 pm following the visitation with Bill Dinwiddie officiating. Burial will be in the Hornet Cemetery with Jake Davis, John Bruegel, Chris Moore, Rob Higginbotham, Doc Lounis and Felix Wright serving as pallbearers.
To order memorial trees or send flowers to the family in memory of Billie Lee (Moss) Briley, please visit our flower store.