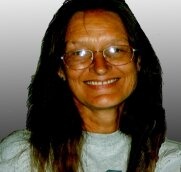 Becky Elaine Babcock was born April 12, 1954 in the County of San Diego, CA. Becky formerly worked for the Seneca R7 School as a custodian.

Becky was preceded in death by her parents Charles and Mildred Babcock; one sister Dawn Babcock and one brother Stuart Babcock.

The body has been taken for cremation under the direction of Campbell-Biddlecome Funeral Home, Seneca, and no services are planed at this time.
To order memorial trees or send flowers to the family in memory of Becky E. Golden (Babcock), please visit our flower store.