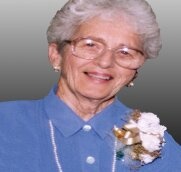 On April 28, 2019, Ann Ball was welcomed to the sweet land of rest, the place she worked faithfully her whole life to reach.

A 1933 Fourth of July baby, Annie Lois Knight was born in central Alabama to Roosevelt and Georgia (Kight) Knight.

It was in her beloved home state she met a smooth-talking farm boy from Seneca, Missouri, who was stationed at nearby Fort Benning. On September 2, 1952, Ann was united in marriage to U.S. Army Sgt. Floyd Ball in Phenix City, Alabama.

The couple had four children — Floyd Ray Jr., Anita Gail, Yvonne and Randy Allen. They lived at Fort Benning until Floyd’s service was completed, then in California briefly before settling for life where he was raised in rural Seneca. The couple were inseparable for 63 years and 10 months, until Floyd’s death in 2016.
Ann supported Floyd in all his dreams, and the two worked side by side, fulfilling them together. They came out of “retirement” to operate Circle B Buggies & Wagons, handcrafting pieces of the Old West that were sought after by people all over the country, including dignitaries.
She not only did work in the home and cared for the children in the early years, but also Ann wasn’t afraid of “men’s work,” no matter her age. She toiled alongside her husband on the Circle B Ranch, with the children reporting she milked more cows than Floyd ever even thought about.
Ann loved gardening to provide for the family, and she shared her bounty with friends and loved ones, spending hours in the sun to get things just right.

It was important to Ann that she do what she could with her own hands and talents. That philosophy extended to things like quilting and canning and cooking — with Floyd always saying he’d rather have her cooking than any from a restaurant. Except of course, if Ann was the cook there. Ann owned and operated the Wagon Wheel Cafe in Seneca at one time, and later was a cook at other cafes. Ann took pride in her efforts, and she enjoyed being a hostess, especially on Christmas Eve, her favorite holiday. Fact is, no one came to her home on a regular day without Ann stepping into the kitchen to fix them a feast — even if they weren’t hungry.
Ann’s faith was the most important thing in her life. It guided her every decision, every day. She was a member of the Bethel Baptist Church, and before that, the Hart Baptist Church. She taught Sunday School class for more than 45 years, was a longtime member of the choir, and she volunteered for anything needed at the church. For 30 years, she held a weekly devotional ministry at the Seneca Home Place. Later, she was joined by Floyd in that ministry.

For nearly 64 years, Ann took care of Floyd and he took care of her. But it was her patience, prayers and constant Christian example that brought Floyd to the Lord. Her husband credited her Christian example and never-ceasing faith as being the light that overcame his stubbornness. The two spent the remainder of their lives with the hope that six decades together on Earth would not be all there was to their story — they would be reunited again through God’s promise.

Ann is survived by her children, Floyd Ray Ball Jr. and wife, Jane, of Seneca; Randy Ball and wife Debbie, of Cleveland, Okla.; and Anita O’Brien, of Broken Arrow, Okla.; siblings, Myrtice Arrington, of Roanoke. Ala.; Lorene Glass, of Gadsden, Ala.; and Buddy Norris, of Roanoke, Ala.; seven grandchildren — Corey Ball, Chris Ball, Brandi Ball, Blake O’Brien, Kristen Kendrick, Lindsay Head and Mikeal Ball — and 10 great-grandchildren.
The family will receive friends from 5:30 p.m. to 6:30 p.m., Wednesday, May 1, 2019 at the Campbell-Biddelcome Funeral Home.

Funeral services under the direction of Campbell-Biddlecome Funeral Home, Seneca will be held at 2 p.m., Thursday, May 2, 2019 at the Bethel Baptist Church, with Fred Mills officiating. Burial will be in the Swars Prairie Baptist Cemetery with Corey Ball, Chris Ball, Blake O’Brien, Mikeal Ball, Brock Kendrick and Lindsay Head serving as pallbearers.
In lieu of flowers, the family asks you consider a donation to Bethel Baptist Church.

To order memorial trees or send flowers to the family in memory of Ann L. Ball, please visit our flower store.