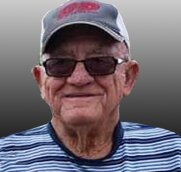 A.J. Merriman was born October 19, 1935 in Racine, MO the son of Arnold and Cinderella (York) Merriman. A.J. had lived in the area all of his life. He was a carpenter and had worked on several businesses and homes in and around the Seneca, Wyandotte and Grove area. A.J. attended Pentecostal Life Center in Joplin, MO.

A.J. Merriman married Patricia J. Chase March 11, 1960 in Seneca, MO and she preceded him in death April 8, 2014. He was also preceded in death by his parents; one daughter, Deborah Blount and one brother JR Merriman and one sister Phyllis Reed.

Graveside services will be held at 10:00, Tuesday, August 11, 2020 at the Council House Cemetery with Jarrod Jones officiating.

The body will lie in state at the Campbell-Biddlecome Funeral Home for family and friends Monday from 10:00 am to 6:00 pm
To order memorial trees or send flowers to the family in memory of A.J. Merriman, please visit our flower store.

Family and friends may come to the funeral for viewing and sign the register book Monday, August 10, 2020 from 10:00am to 6:00pm. There will not be a organized visitation with the family present.