To share your memory on the wall of Terry Testerman, sign in using one of the following options:

Terry I. Mersman was born November 24, 1959 in Neosho, MO the daughter of Edward and Clornia (Bennett) Mersman. Terry enjoyed spending time with her grandchildren, crafting, scrapbooking and shopping for her kids and grandkids. Terry was a homemaker and was of the Christian Faith.

Terry I. Mersman married Darrell Testerman December 24, 1977 in Seneca, MO and he survives.

The family will receive friends from 6 to 7 pm, Thursday, November 19, 2020 at the Campbell-Biddlecome Funeral Home Seneca.

Graveside services under the direction of Campbell-Biddlecome Funeral Home Seneca, MO will be held at 10:00 am, Friday, November 20, 2020 at the Thompson Grove Cemetery, south of Seneca, MO with Pastor Billie Gibson officiating.
Read Less

To send flowers to the family or plant a tree in memory of Terry Testerman, please visit our Heartfelt Sympathies Store.

Receive notifications about information and event scheduling for Terry

We encourage you to share your most beloved memories of Terry here, so that the family and other loved ones can always see it. You can upload cherished photographs, or share your favorite stories, and can even comment on those shared by others. 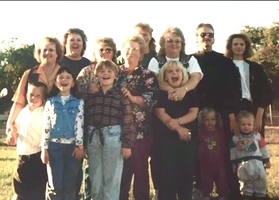