To share your memory on the wall of Patricia McGehee, sign in using one of the following options:

Patricia McGehee, 89, Spingdale, AR passed into eternal rest September 9, 2020 at the Maples Care Facility in Springdale, AR after an illness.

Patricia McGehee, 89, Spingdale, AR passed into eternal rest September 9, 2020 at the Maples Care Facility in Springdale, AR after an illness.

Patricia McKenna was born October 23, 1930 in Hominy, OK the daughter of George and Evelyn (Spicer) McKenna. She was a Graduate of Seneca High School. Patricia loved Christmas and decorating for Christmas. Though her working life is worked at the former Welch Egg Plant in Neosho, MO, the former Gene’s Food Market, Seneca and the Seneca High School Cafeteria. Patricia moved from Seneca in 1967 to Spingdale, AR. She worked for Welch Foods in Springdale and Scotts Paper Company in Rogers. She accomplished many things in her life including Skydiving at the age of 69. Patricia was a member of the Seneca Cayuga Tribe of Oklahoma and was of the Pentecostal faith.

Patricia was preceded in death by her parents; one daughter, Georgia Miller in 1969, one son Ronnie Paul McGehee, one son-in-law Gene Davis in 2017; one sister Dorothy (Dot) Stoner and one brother Bob McKenna.

Friends and family can view from 9 to 4 pm, Saturday, September 12, 2020 at the Campbell-Biddlecome Funeral Home, Seneca.

Graveside services will be held at 11:00 am, Monday, September 14, 2020 at the Modoc Indian Cemetery north of Wyandotte, OK, with Pastor Larry Convirs officiating.

Arrangements under the personal direction of the Campbell-Biddlecome Funeral Home, Seneca, MO.

To send flowers to the family or plant a tree in memory of Patricia McGehee, please visit our Heartfelt Sympathies Store.

Receive notifications about information and event scheduling for Patricia

We encourage you to share your most beloved memories of Patricia here, so that the family and other loved ones can always see it. You can upload cherished photographs, or share your favorite stories, and can even comment on those shared by others. 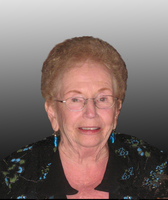