To share your memory on the wall of George Stone, sign in using one of the following options:

George Verdell Stone was born August 1, 1938 in Quito Tennessee the son of Frederick and Cena Bell (Chappell) Stone. George had lived in the area over 50 years. He formerly worked for Sperry-Vickers and Griffin Grocers both in Joplin. George retired from Midwest Machinery in Joplin after working there 20 years. George served his country in the US Airforce from 1956-1960. He loved fishing, gardening, metal detecting and reading. George formerly served as a Deacon and a Elder and was a faithful member of Racine Christian.

George was preceded in death by his parents; one daughter Kelli Stone and one great-granddaughter Addlynn.

To send flowers to the family or plant a tree in memory of George Stone, please visit our Heartfelt Sympathies Store.

Receive notifications about information and event scheduling for George

We encourage you to share your most beloved memories of George here, so that the family and other loved ones can always see it. You can upload cherished photographs, or share your favorite stories, and can even comment on those shared by others. 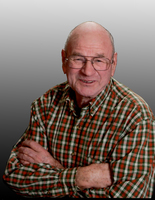