To share your memory on the wall of Douglas Blevins, sign in using one of the following options:

Douglas was born June 8, 1967 in Joplin, MO the son of Marvin Blevins and Lucretia Rumetsch. Douglas lived in the Seneca area his entire lif... Read More
Douglas Blevins, 51, Seneca, MO went to be with the Lord suddenly at his home on June 1st, 2019.

Douglas was born June 8, 1967 in Joplin, MO the son of Marvin Blevins and Lucretia Rumetsch. Douglas lived in the Seneca area his entire life. Doug as he was better known attended and graduated from Seneca High School in 1985. He later attended the University of Arkansas where he received a certificate in Maintenance of Engineering. Doug started his career in manufacturing just after High School at Coopers furniture in Goodman, MO. He later went on to work for Sunbeam, before he settled into a 19-year career as a Maintenance Engineer at the former Milnot/Smuckers. He retired in 2010 where he spent the remainder of his years watching westerns, tinkering in his shop, and living the life he wanted.

Doug was always willing to help anyone and could fix literally anything. His grandkids made a sign which he displayed with great pride that read, "If Papa can't fix it, no one can." Doug knew Jesus and often read his Bible. Later in life Doug developed a great fondness for Dr. Pepper and Pepperidge Farm German Chocolate Cake. If you visited his house on any given night you just might have caught him with one or the other. Doug loved his family dearly, and had a very close relationship with his children and grandkids. They knew him as Papa Doug, and the guy that could fix anything. He was always there for his kids fixing whatever, moving whatever, and just about anything else that was asked of him. We knew we could always count on him. Doug was always the person we called to help fix what was broken. It will be very difficult to fix this brokenness with him gone.

Doug Blevins and Tereasa Neal (formerly Blevins) were High School sweethearts. Shortly after High School they married on July 20th, 1985. They were married for 13 years before divorcing, but stayed life-long friends. They had two children together, Joshua Blevins of Neosho, MO and Kari Vinson of Neosho, MO and they both survive. Additional survivors include his mother, Lucretia Rumetsch of Neosho, MO; two sisters, Delaina Blevins-Waite of Princeton, TX, and Kandi Smith of Neosho, MO; three brothers, Charlie Herrel of Miami, OK, Dale Blevins of Riverton, KS, and Darren Blevins of Eucha, OK; and his pride and joy his five grandchildren, Lexi Blevins, McKinzie Blevins, Chloe Vinson, Zacheary Blevins, and Kaelyn Perry. He is preceeded in death by his Father, Marvin Blevins.

The family will receive friends from 6 to 7 pm, Tuesday, June 4, 2019 at the Campbell-Biddlecome Funeral Home, Seneca, MO. Following the visitation the body will be taken for cremation.

A Celebration Of Life Memorial Service will be held by the family at a later date.

In lieu of flowers memorial contribution can be made to Josh Blevins to help cover cost of services.
Read Less

To send flowers to the family or plant a tree in memory of Douglas D. "Doug" Blevins, please visit our Heartfelt Sympathies Store.

Receive notifications about information and event scheduling for Douglas

We encourage you to share your most beloved memories of Douglas here, so that the family and other loved ones can always see it. You can upload cherished photographs, or share your favorite stories, and can even comment on those shared by others. 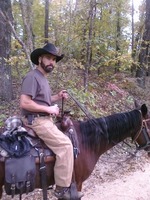