To share your memory on the wall of Charles Aschentrop, sign in using one of the following options:

Print
Charles F. Aschentrop, 70, Neosho, MO, passed away August 7, 2019 at his home in rural Neosho after a long illness.

Charles F. Aschentrop was born August 14, 1948 in Neosho, MO the son of Robert H,. and Mary Isabel (Peck) Aschentrop. Charles was a US Army Veteran. He was a 1966 graduate of Neosho High School and had worked for LA-Z-Boy Midwest in Neosho. He enjoyed fishing. Charles F. Aschentrop married Bonnie O'Bannon August 31, 1990 in Miami, OK and she survives.

Charles was preceded in death by his parents Robert and Mary Aschentrop; his sister Mary Meyer and his brother Gene Aschentrop.

The body has been taken for cremation and a Celebration of Life Grave side memorial service will be held at 10:00 am, Saturday, August 10, 2019 at the Gibson Cemetery, Neosho, with Kevin Klien officiating. Military rites will be held at the cemetery. Arrangements under the direction of Campbell-Biddlecome Funeral Home, Seneca, MO.
Read Less

To send flowers to the family or plant a tree in memory of Charles "Fred" Aschentrop, please visit our Heartfelt Sympathies Store.

Receive notifications about information and event scheduling for Charles

We encourage you to share your most beloved memories of Charles here, so that the family and other loved ones can always see it. You can upload cherished photographs, or share your favorite stories, and can even comment on those shared by others.

Linda and Lysa sent flowers to the family of Charles "Fred" Aschentrop.
Show you care by sending flowers

Posted Aug 09, 2019 at 07:30am
Loved the 4th of July with you all.He loved his family and smiled a lot. Iwill miss you. Sorry for your loss.
Comment Share
Share via:
LL

Linda and Lysa purchased flowers for the family of Charles Aschentrop. Send Flowers 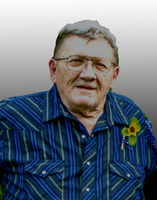